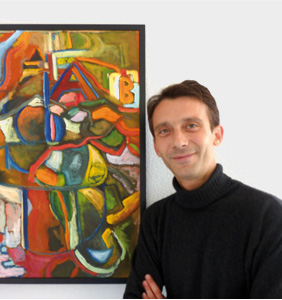 Giuseppe Blasotta was born in Foggia, Italy in 1972. He spent his childhood in different Italian cities, among which Venice, Milan and Turin were the most influential.

At the age of 20, Giuseppe was a Philosophy teacher at the Ginnasio Liceo Classico G. Giusti and the Centro Studi G. Vico in Turin. While he was in Turin, Blasotta was awarded the Erasmus scholarship to study Philosophy in Heidelberg, Germany. During his studies there, he began to devote more time to painting. His first exhibition was November 1999 in the Museum of Ruprecht-Karls-University of Heidelberg, which was opened by the philosophers Hans-Georg Gadamer and Donatella Di Cesare. In June 2013, he exhibited in New York at Ethan Cohen's KuBe, Kunsthalle Beacon and in Manhattan.

After a ten-year study hiatus, Blasotta returned to the University of Heidelberg to once again study Classical Philosophy and Italian Literature.

1999 - Museum of the University of Heidelberg

2002 – In the atrium of the Federal Foreign Office in Berlin, in cooperation with Villa Vigoni and the Italian Embassy

Opening of the exhibition by his Excellency Bishop Pieschl

2003 - St. Thomas Church in Berlin in cooperation with the IIC (Istituto Italiano di Cultura) in Stuttgart

2008 - Resident artist by the art collectors Priscilla and Larry Grinwis

2015 - Resident artist by the art collectors Priscilla and Larry Grinwis

2015 - Center of the Catholic University of Heidelberg (KUZ)